Where To Go: November

Offerings on an altar to welcome back the ghosts of the dead for Día de Muertos, iStock.com/shinki_chen

It’s the Day of the Dead festival in Mexico, bonfire night across the UK, elephant round up time in Thailand, rice cake war day in Indonesia and the festival of the horned one in Italy – five fabulous reasons to take a week off and travel this November. 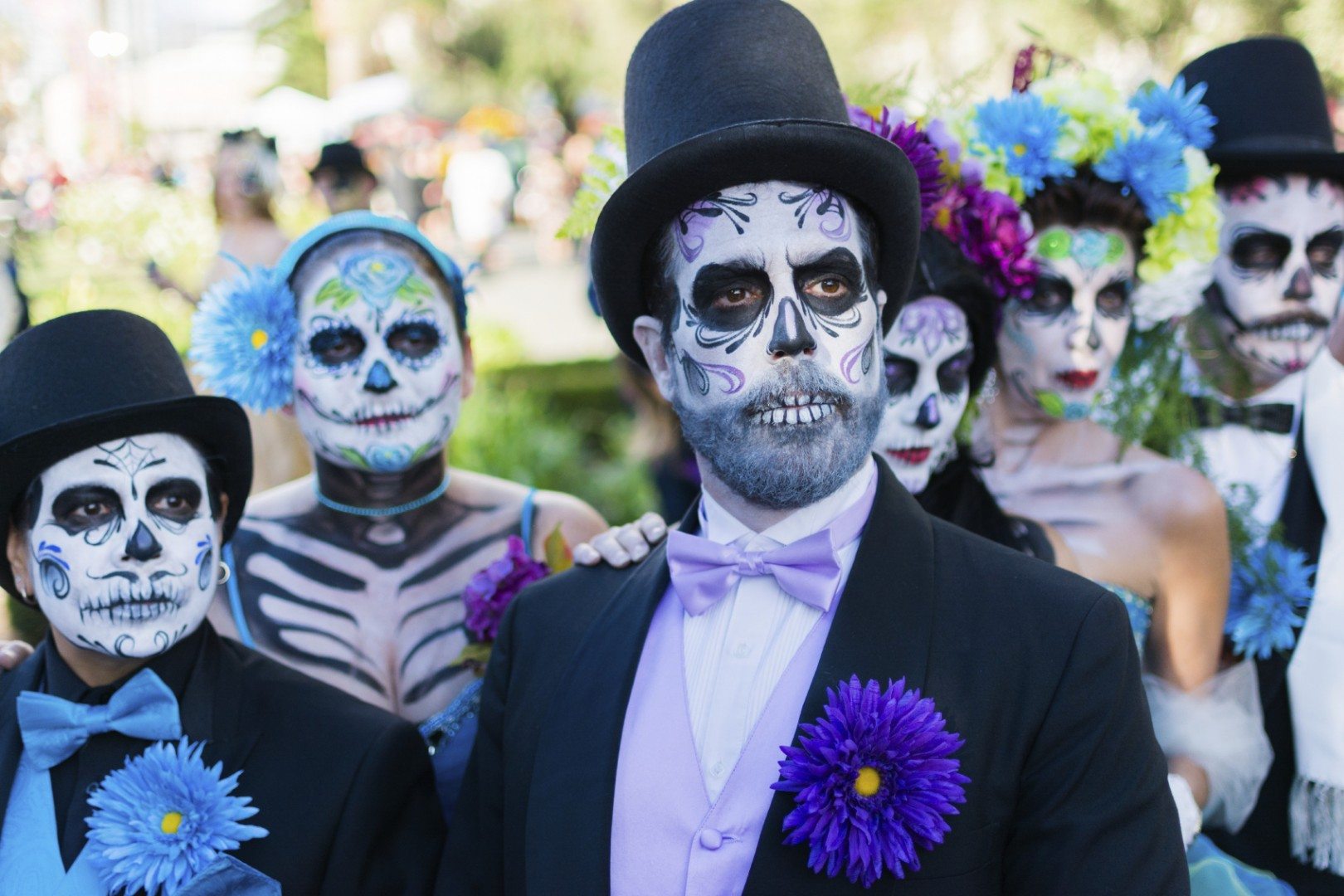 Everyone’s invited to this party… even the dead, iStock.com/br-photo

Mexico’s Carnivalesque remembrance of departed souls is one of the world’s most universally recognized festivals. It’s a Latin rave up from beyond the grave, an in-your-face upbeat celebration of immortality that is at once grisly and exhilarating, and more than celebrating in situ. Across the nation there are parades, parties and celebrations. Shops and markets fill with miniature coffins, skulls and skeletons made of chocolate, marzipan, paper, cardboard and clay. These dead puppets are often involved in witty very non-dead activities like riding bicycles or playing music. The festival is celebrated with offerings at altars, a carnival atmosphere, street parties, cemetery visits and music. All because in a tradition inherited from the Aztecs, Mexicans believe their dead are lurking in Mictlan, a sort of purgatory or spiritual waiting room, and the Day of the Dead is the one single day they can return home each year. Arches made of bright yellow marigolds are put up symbolizing doors to the underworld, and altars are filled with flours, candles, water and pan de muertos to welcome the dead after their tiring journey. Toasts are said to the ghostly visitors, especially to any who have recently departed. Events finish with a visit to the graveyards, and often en route there’ll be funfairs and carts selling crucifix-shaped waffles. At the graves relatives will spend time cleaning tombstones and decorated them with candles and flowers, having picnics and dancing to mariachi bands. And the streets are filled with folks in full gruesome costume and papier-maché skeletons dressed up and adorned with jewellery and hats. You’ll find major carnivals, vigils and gatherings all across Mexico but particularly in the south – at Mixquic the ‘City of the Dead’ for example and in the ancient town of Oaxaca – and in the north – at the town of Guanajuato and on Janitzio Island. For a national cultural celebration on an immense scale there’s no better time to visit. FYI: the opening scene in the new James Bond film Spectre is filmed during the Day of the Dead! 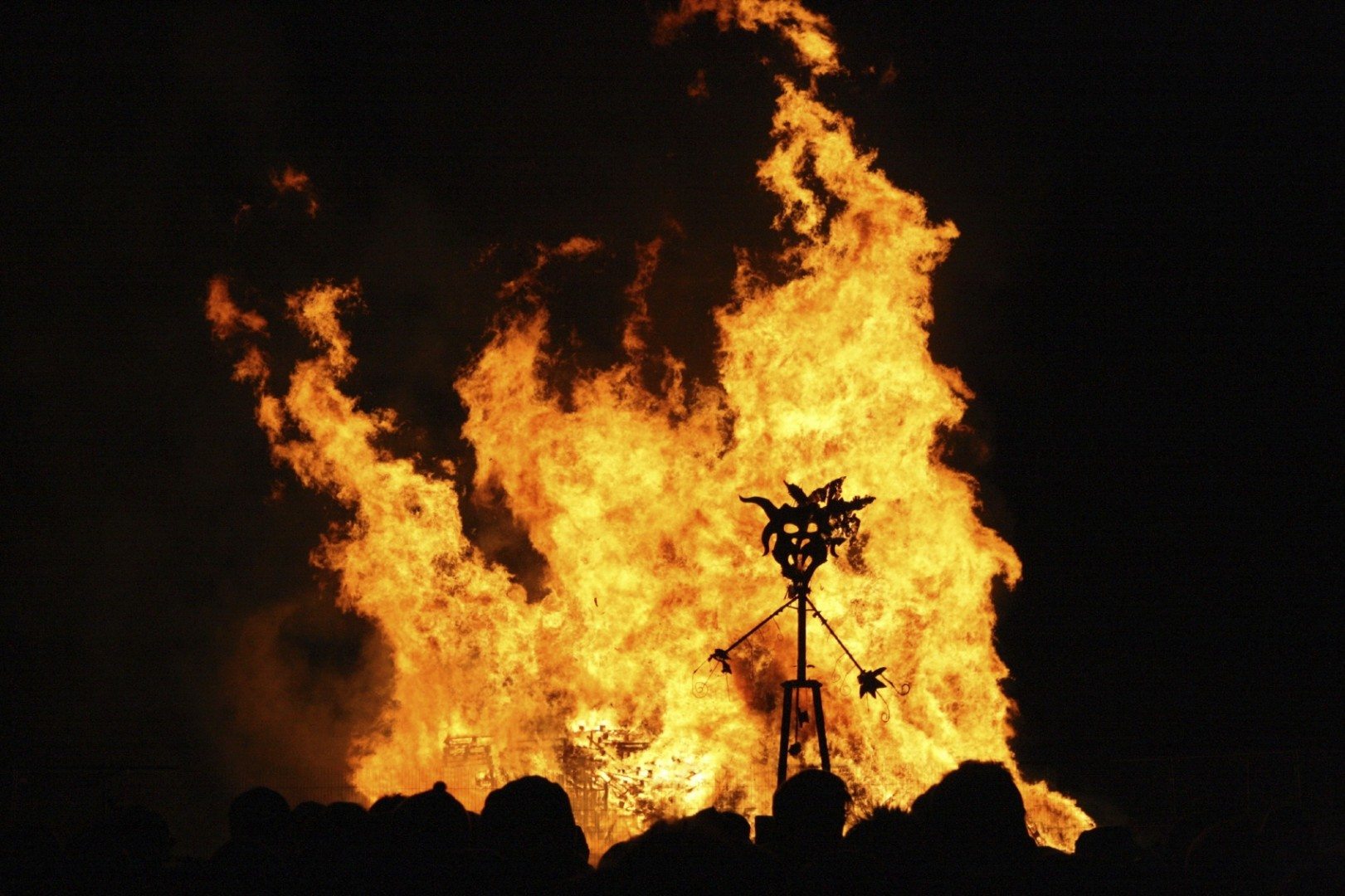 Guy Fawkes Night or Bonfire Night is a very English affair – effigies are burned, fireworks light the sky and the Brits remember the day back in 1605 when a group of Catholic dissidents attempted to blow up the Houses of Parliament with the protestant King James and his sons inside. Dummies of Guy Fawkes, the man rumbled underneath Parliament as he was about to light up the barrels of gunpowder, are burned on a pyre and Catherine Wheels and Rockets spin and fizz. Everyone waves sparklers, drinks mulled wine and enjoys the festivities at celebrations in parks and gardens across the country. There are big events in London at Primrose Hill and a particularly grand celebration in Lewes on the south coast where up to 60,000 people flock to see effigies of the Pope get incinerated all because way back when Catholic Queen Mary I burned 17 Protestant rebels at the stake in the town. Today they burn other figures too from prime ministers to presidents and six bonfire societies parade through the streets in medieval costume. In Devon in the southwest of England in a little town called Ottery St Mary, you’ll even find families rolling flaming barrels of tar through the centre of town – we’re not sure why.

Stay in the UK with London Made Perfect, Blandings and Loyd & Townsend Rose in properties including Austen, the Bath Estate and Winchester Manor House. Click here to find out more. 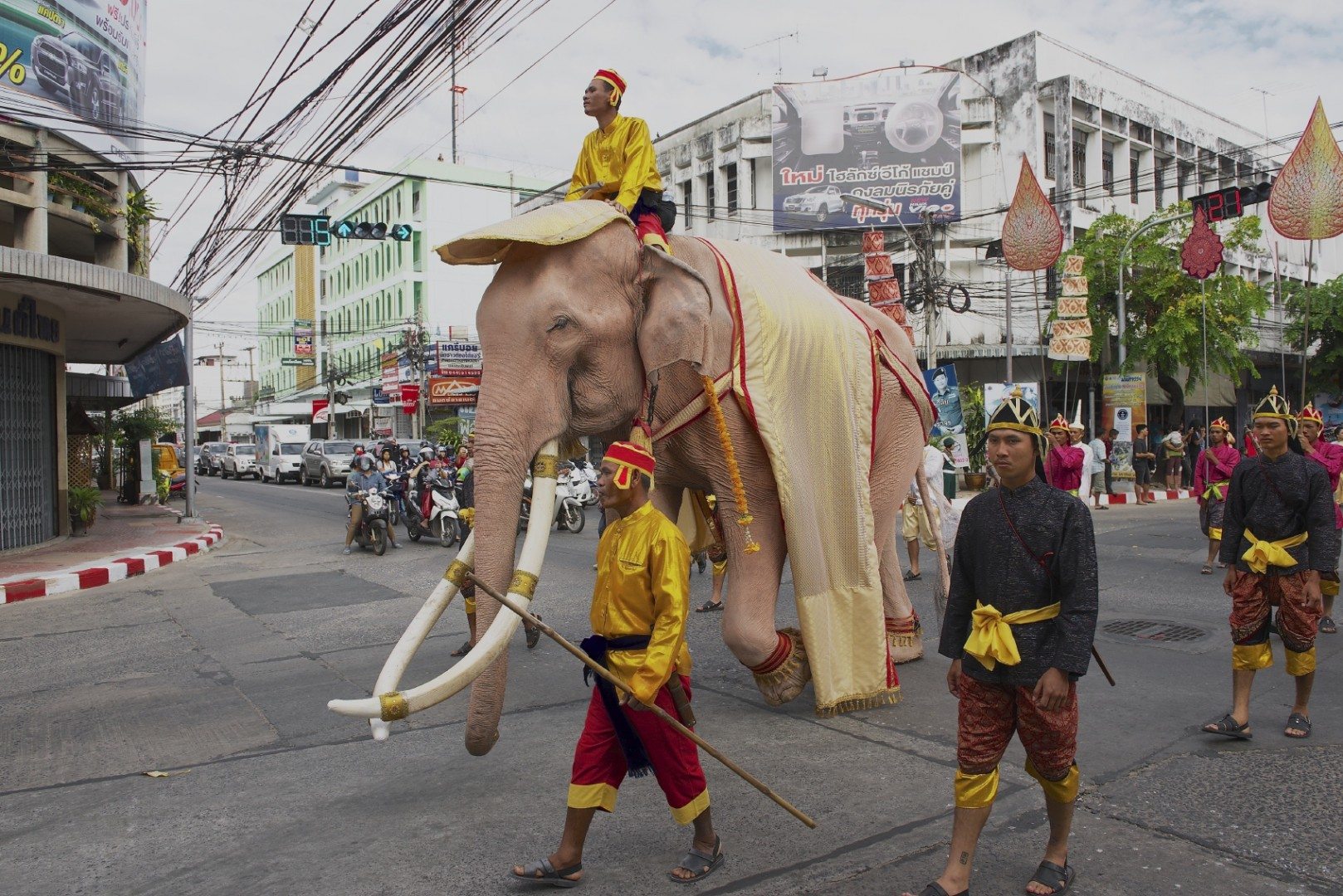 The provincial town of Surin hosts Thailand’s biggest elephant show in it’s Sri Narong Stadium and is absolutely packed to bursting with visitors keen to enjoy the spectacle. These huge mammals show off their skills playing football, running around and having tugs of war with up to 70 men against one elephant. There are log pulling demonstrations and renenactments of old hunting and war scenes where elephants played their part. Through the third week of November hundreds of elephants parade through the streets of Surin getting the royal treatment – the ‘elephant breakfast’ where the roads are lined with piles of food for the pachyderms to munch on is particularly popular. If you like elephants and want to up close and personal with them this is the place.

Stay in Thaliand with Global Nomad in properties including Yao Noi . Click here to find out more. 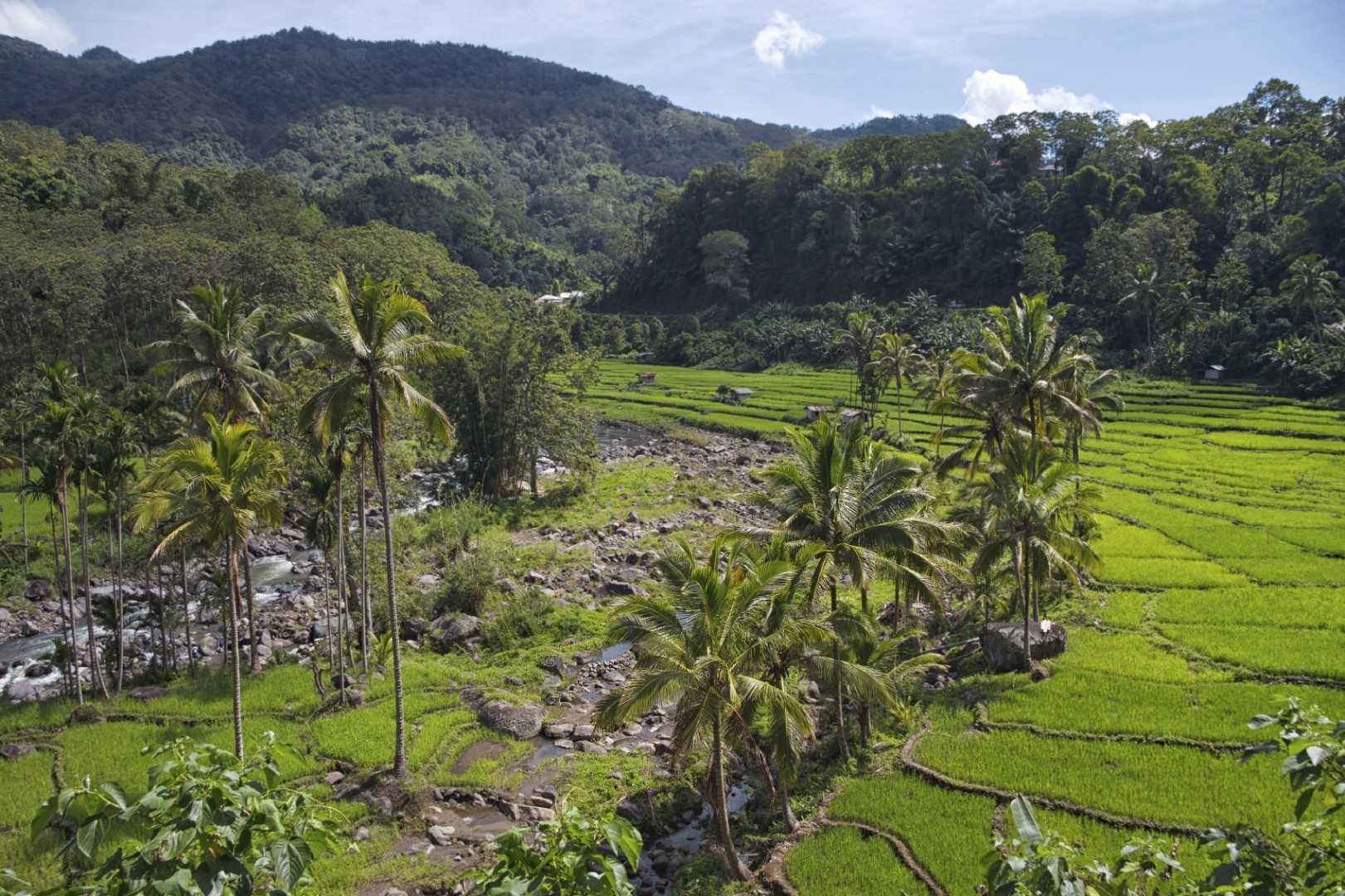 Rice from here gets used in a huge food fight to celebrate the harvest, iStock.com/AliceNerr

This super fun harvest festival, where both Hindu and Muslim Indonesians pelt each other with boiled rice, is absolutely mad to watch. In Lombok, east of Bali, a week of preparation culminates in the Sasak Wektu Telu community and the Hindu community meeting at the 18th century Pura Lingsar Hindu/Muslim temple to battle it out. Each group stands on opposite sides of the temple courtyard and give thanks for the years harvest. Then they wait and watch for the wilting of the Waru flowers, which bloom and die in a day. At the moment the first flower falls, at around 4pm, the groups began to throw hundreds of ketupat parcels (sticky rice wrapped in coconut leaves) at each other – all in good nature of course. And when it’s over everyone eats the remaining rice and anything left over is buried in the rice fields to ensure good crops next season. 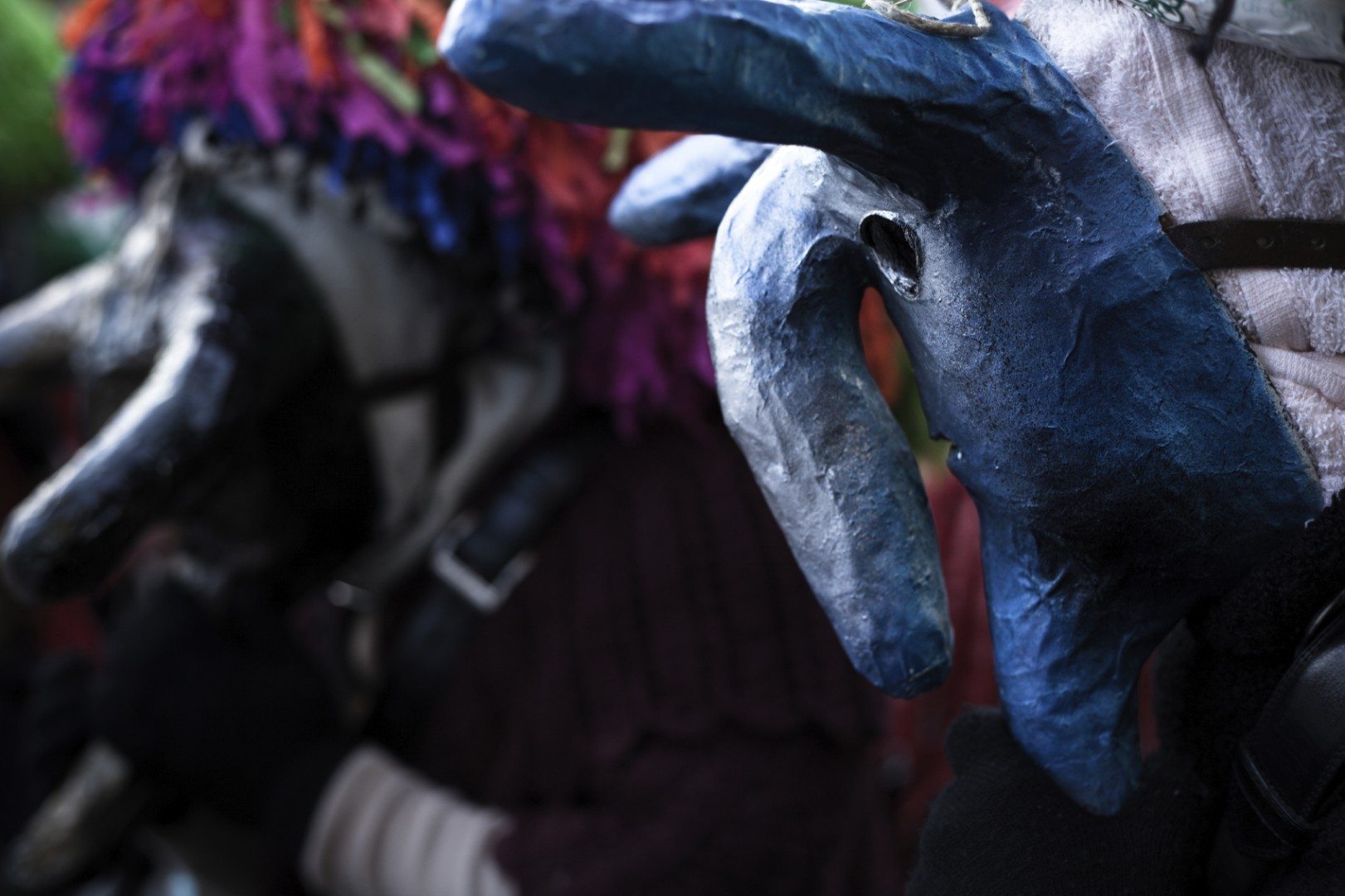 Horned masks worn by actors for the festivities, iStock.com/MrKornFlakes

You won’t believe the strange little Festival of the Horned One in the village of Rocca Canterano close to Rome which is exactly why you need to go see it for yourself. It’s a celebration of cuckolds, those men and women who have been betrayed by a fickle partner, in other words have been blessed with cuckolds horns! But there’s no moping and moaning here. Costumed actors travel down the main drag on allegorical floats reciting satirical compositions about betrayal, love and affairs. If you’ve had the misfortune to be cuckolded then this is the place for you – eat roast chestnuts, laugh at other cuckolds and celebrate being rid of the traitorous fiend instead. Then run off to Rome, the capital of romance and see if you can’t find a new lover for the vacation.

Stay in Italy with Homebase Abroad, Unique Properties and Events and The Best in Italy in properties including Via Dei Prefetti, Villa Appia and Poggio Alle Mandorle. Click here to find out more.