UltraVillaThe JournalThe JournalHow We Started: the Residence on the Rocks

How We Started: the Residence on the Rocks

Sometimes fate puts us in the right place at the right time. We discover a fascinating example of this through the story behind the gorgeous Residence on the Rocks villa. Located in a secluded area on the estate of the Banyan Tree Resort on Mahé,the main island of the Seychelles, the villa came about partially thanks to a race car driver and a member of the Beatles! The villa’s owner Karl Ammann tells us more… 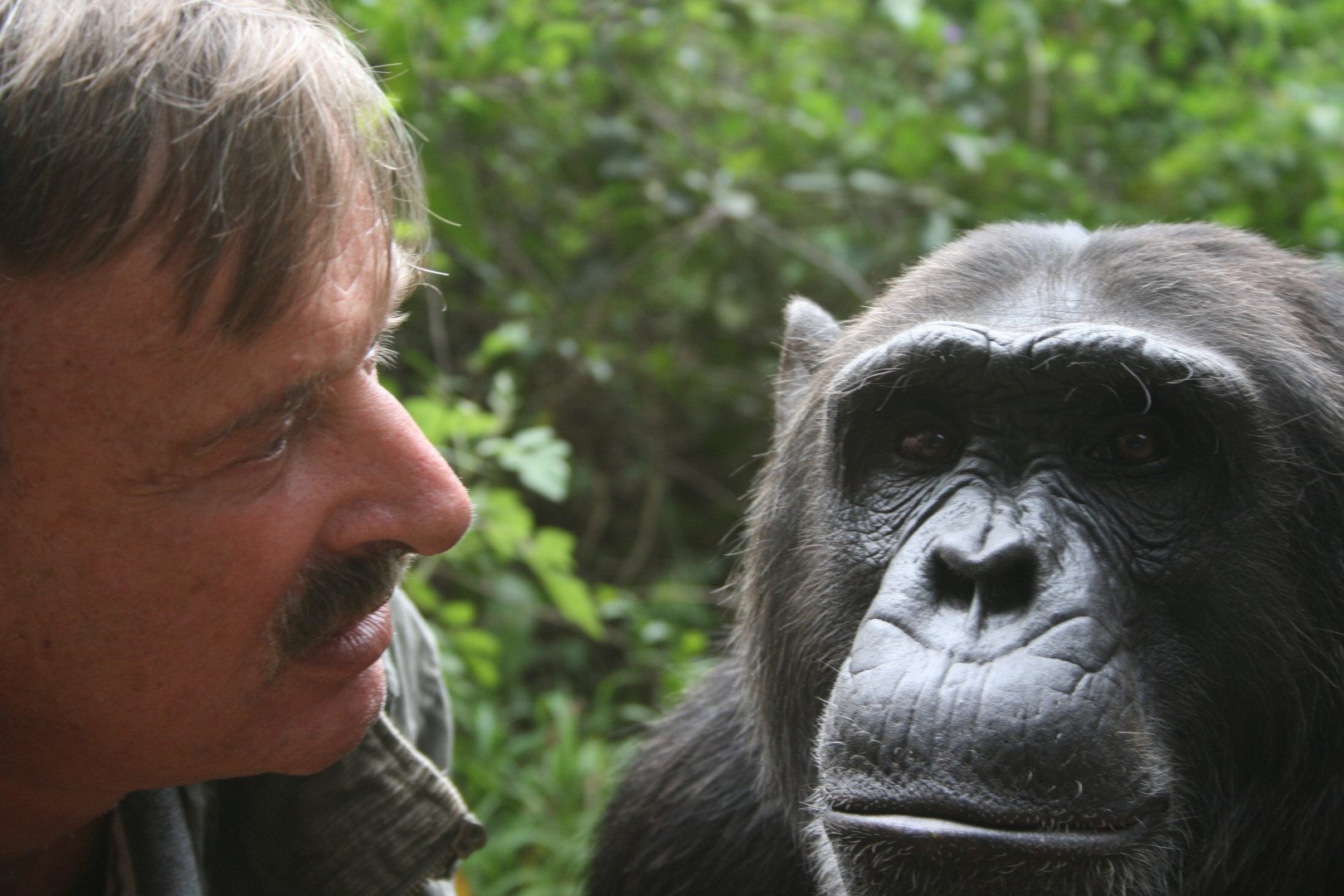 “Like most frequent travelers to the Seychelles I fell in love with the islands on my very first visit. That was in 1977 while I was working in the hotel industry in Kenya and at British Airways (then still BOAC), operating a VC 10 which traveled from Hong Kong to London via the Seychelles and Nairobi – a strange route indeed by today’s airline routing criteria!

“However, at the time it was the most convenient way to get from Nairobi to East Asia. Having allotted some time for a short stop over on Mahé on one of these trips, I was soon back for a real vacation. Driving around the island immediately resulted in the desire to own a piece of this paradise. 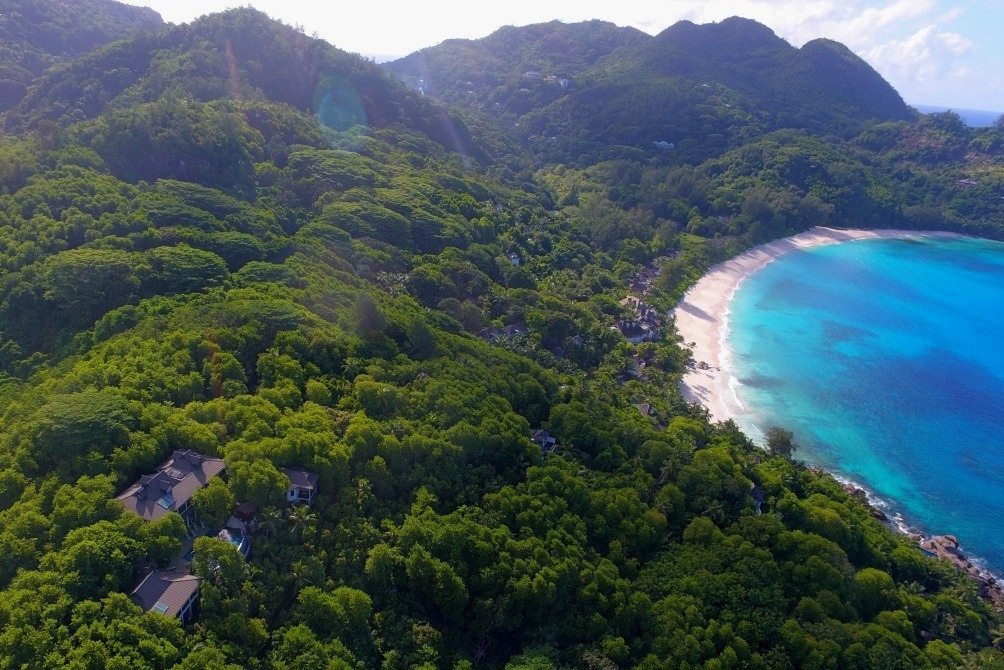 Arial View of the Residence on the Rocks

“I then met up with some British expatriates who had decided to stay behind in the construction industry after working on the construction of the Mahé Airport. They had started to actively market properties to foreigners and managed to convince me that the time was right to build a retreat on Mahé. So after some research I bought a plot at Les Cannelles, overlooking Anse à la Mouche. Though this first villa project didn’t come without its share of complications from the local authorities regarding official documents from back home and some building regulations.

“For the next few years I was a regular visitor to Mah,é bringing along my diving equipment and making a range of friends. Once my father retired, my parents began spending regular winters in the sun, yet concerns regarding having proper medical back up gradually reduced their trips. Therefore, maintaining a predominantly empty villa started to become a financial issue and a twist of fate changed our Seychelles’ destiny. 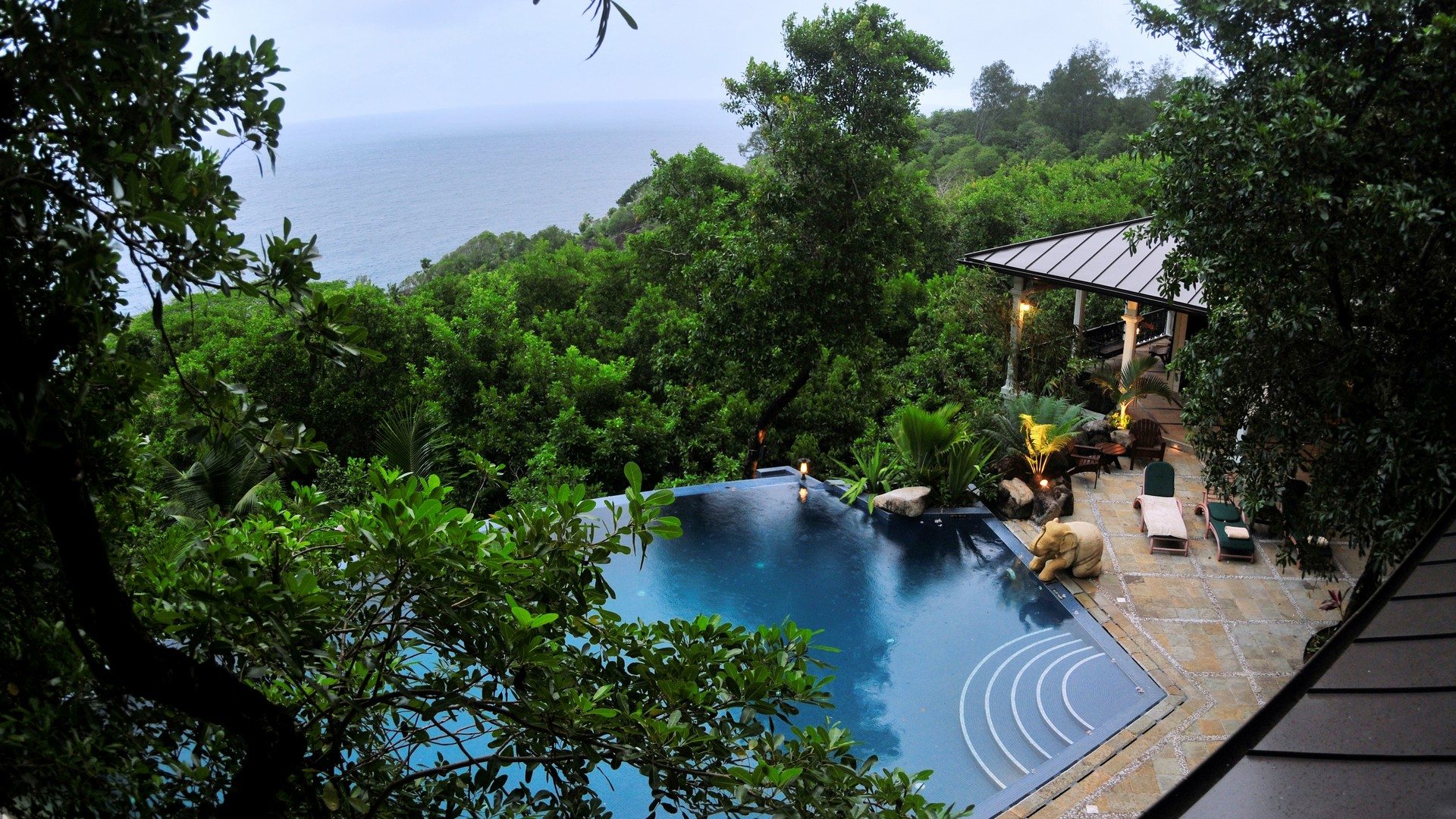 View of Residence on the Rocks pool and surroundings

“On a sabbatical from my hotelier’s job in 1980 I ended up in Kenya’s Masai Mara Reserve doing some research on cheetahs. One day I came across a stranded minibus and I stopped to offer the tourists a lift. It turned out to be Jackie Stewart, the race car driver, and his wife. We hit it off instantly and I took them on several game viewing excursions over the next two days. Afterwards we stayed in touch and got together several times in New York and Switzerland. 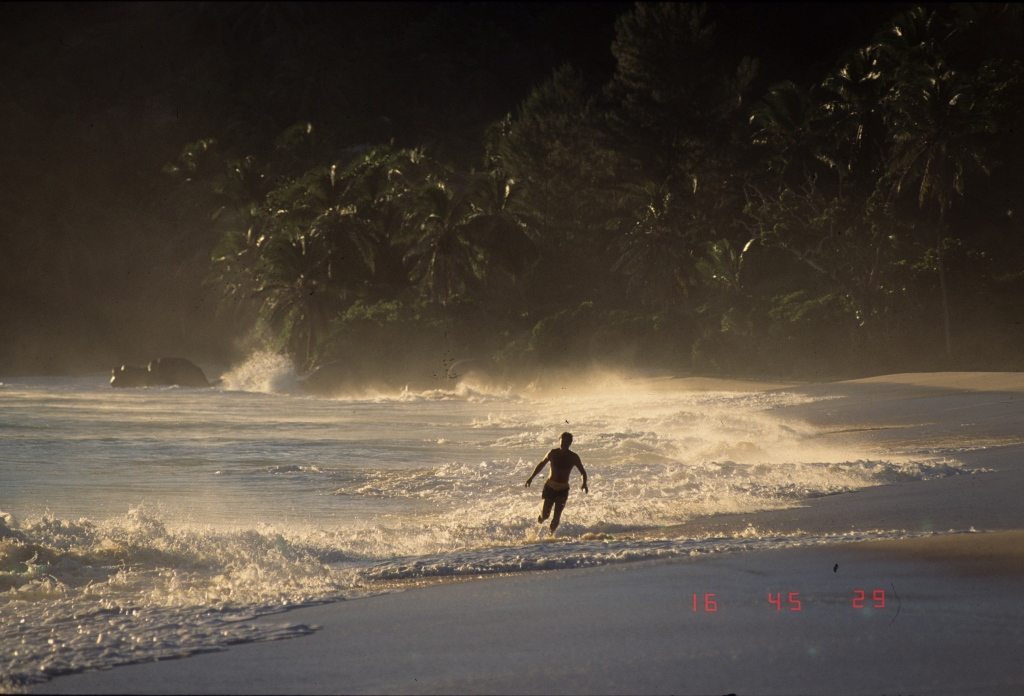 “One day, after I was back in the hotel business but still had my little camp in the Mara, Jackie’s secretary called me to see if I could arrange a safari for a friend of his, the business manager of George Harrison of the Beatles. This was of course no problem at all and Denis and his family had a great time on safari. During our time together, the Seychelles came up and Denis told me that George Harrison, together with Peter Sellar, had acquired a big plot of Intendance Bay in the south of Mahé. A coincidence since my wife and I would regularly play in the waves of what we consider to be one of the rougher but most beautiful beaches of the archipelago.

“Then came a time when land ownership and redistribution in the Seychelles became an issue and many underutilized properties were being seized for national development. I heard through the grapevine that these events could also affected the Harrison/Sellar’s plot on Intendance. 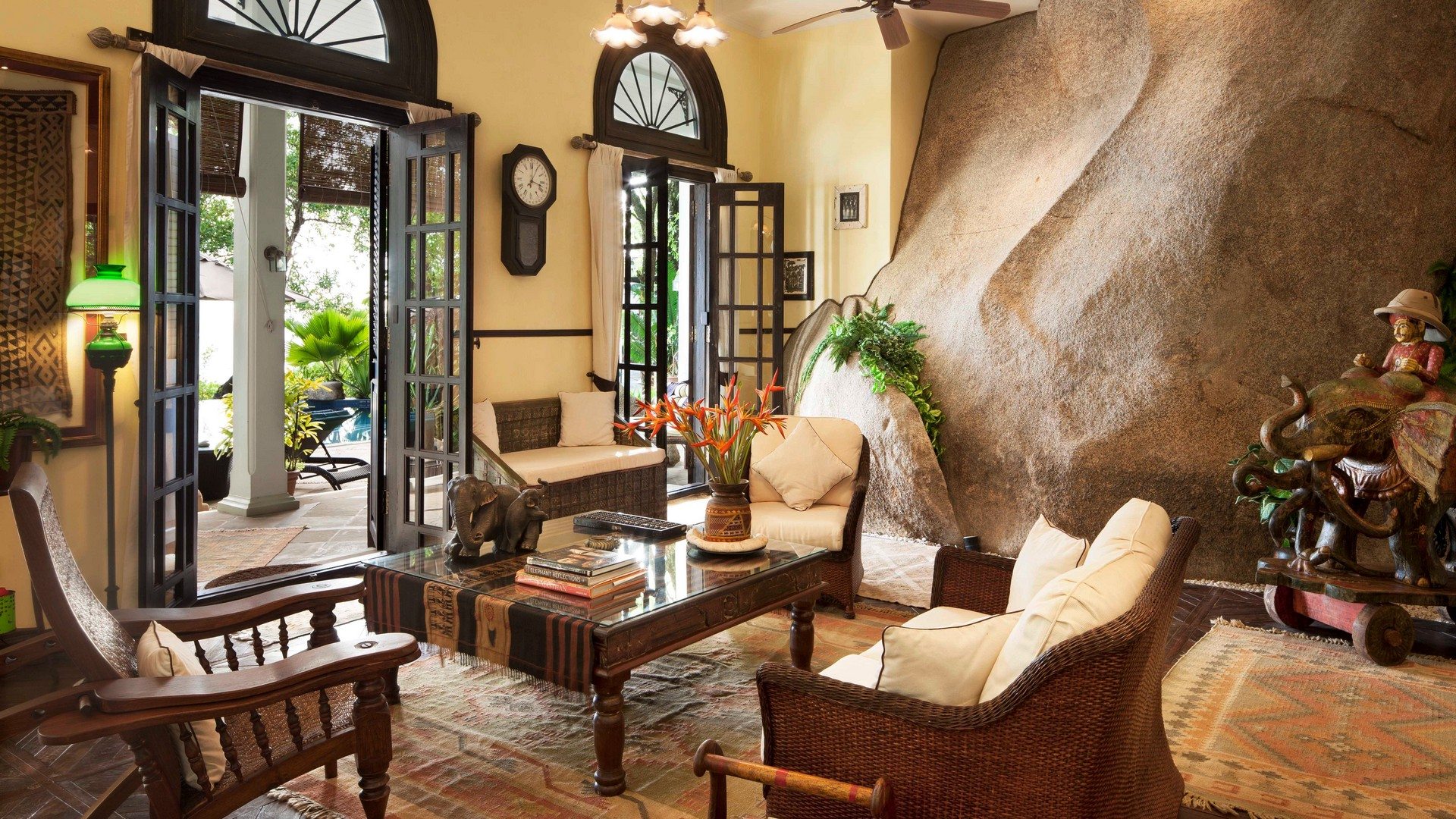 “A few years later there was a change in direction and former owners were given the option to renegotiate the status of plots which were still vacant. Fortuitous timing that I then a British investment broker in Kenya to whom I told the story of the Seychelles and the status of affairs with properties like Intendance Bay. He decided to take a visit over and came back enchanted and interested in investing. I contacted Denis who told me, “I hope we can still find the files, all that land was written down to U$ 1 in our books”. They did find it and a deal to purchase the land was concluded leading to the birth of the Banyan Tree Resort – the first real five star property on Mahé.

“As part of the package of helping to set up the initial phase of the above development, I received a residential plot which was to be part of a larger residential development. Thus, time had come to sell the villa at Les Cannelles and turn my attention to this much more ambitious project – one which did not come without its own set of challenges! From zoning and getting the title to the plot to from acquiring the right equipment to build and then maintain a five star hotel operation, there were many hurdles and things to plan for. 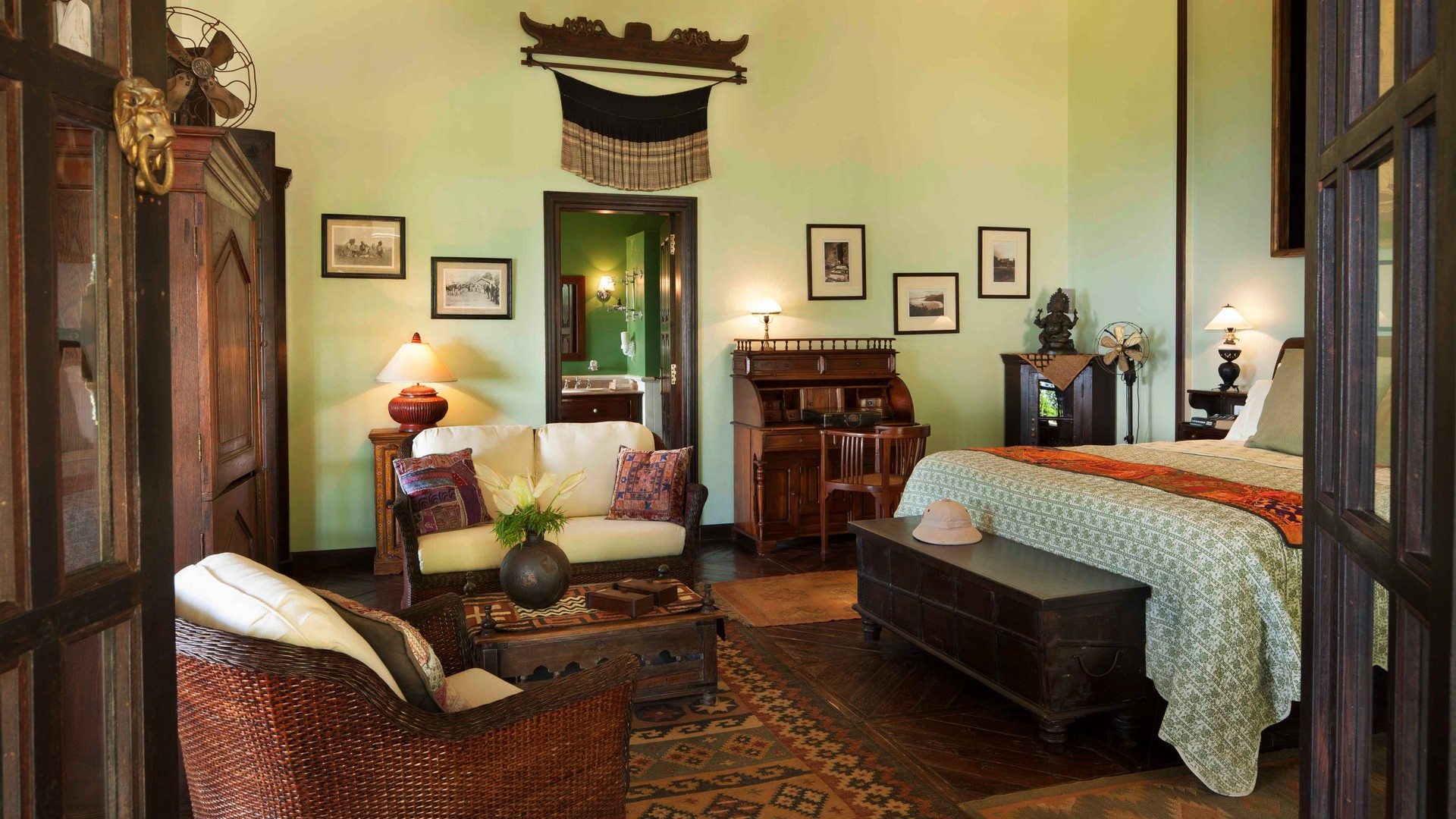 “In the meantime, I had an architect in Kenya, who had previously worked in Seychelles, draw up the plans for my villa based on my very specific instructions and based on some weekend visit to the site in the Seychelles. Dealing with contractors and trying to find the materials we wanted locally created a number of frustrations. Luckily the internet was on the rise and souring what we needed online was probably the best decision I made in the context of building this residence.

“As a result, my wife and I took the project in stride, traveling and searching local markets in several parts of Africa for interesting tribal art, looking for antique colonial furniture in Northern India and scouting the handicraft markets of Chiang Mai and Myanmar for additional décor. Being able to buy by the container load, and still in the end saving quite a lot of money, was one of the most enjoyable aspects of this project. We wanted to have a blend of these international elements with the local Creole style which is in itself a blend of French, Chinese, African Indian and English. 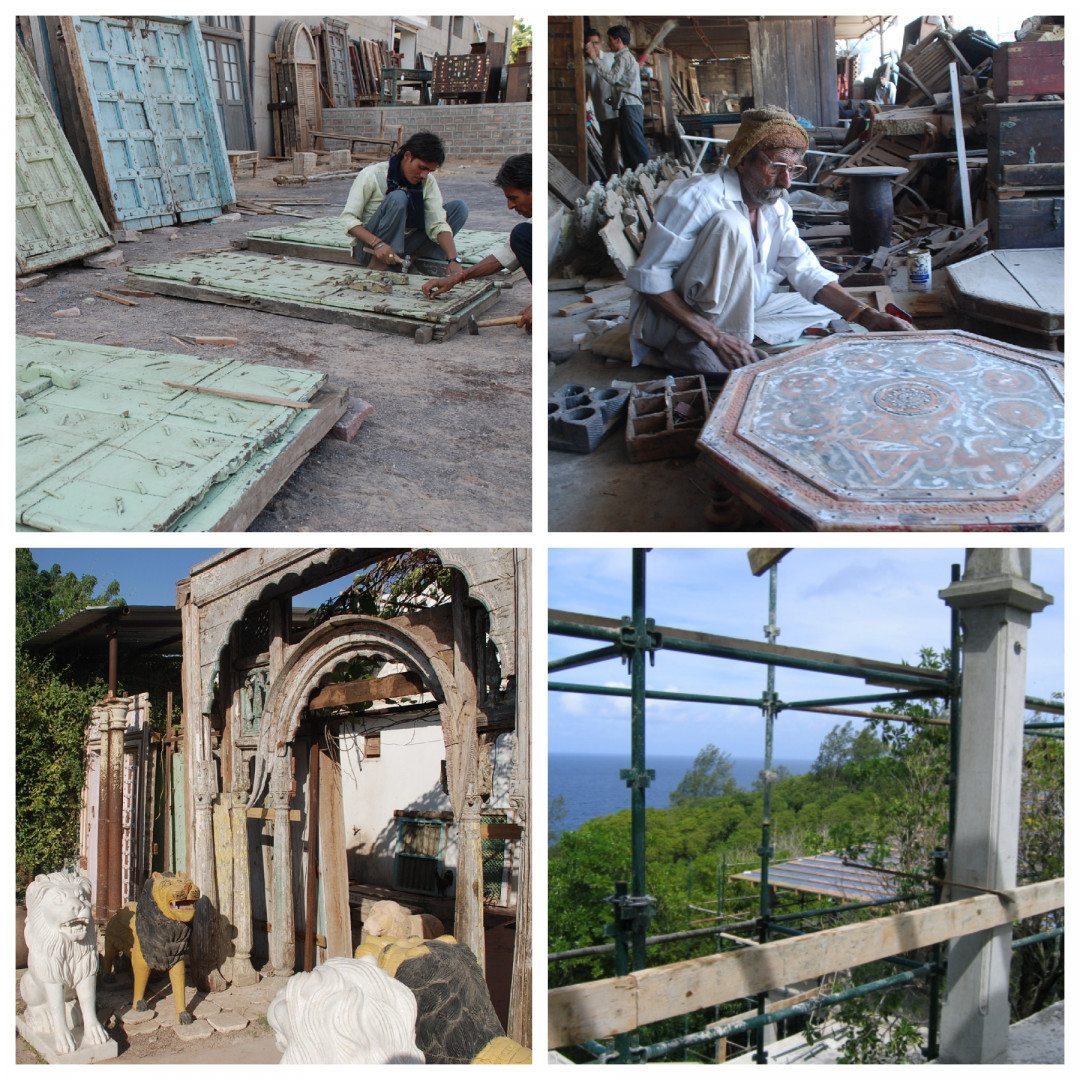 Craftsman at work on the antique doors and artwork, building the villa

“In addition, we choose recycled Burmese teak timber for all the doors and the floors and most of the other wood needed, save for the 16 antique French doors. We also found a wide variety of antique wrought and cast iron pieces which we incorporated into the decor.

“I then decided to expand on the ‘green building concept’ by adding a 50,000-liter rainwater collection tank under the guest house, as well as incorporate solar panels for hot-water heating and other energy saving electrical devices. 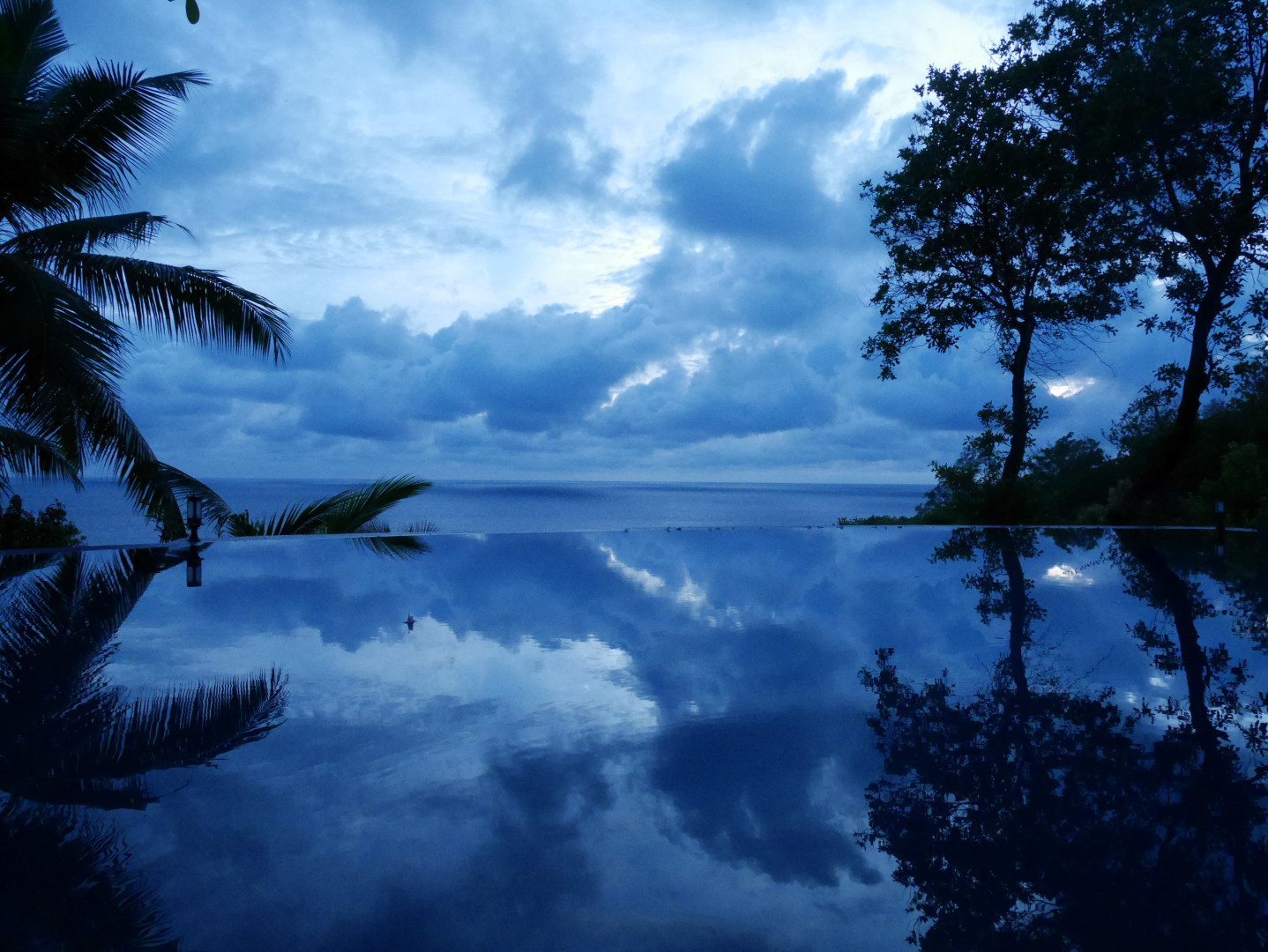 “However, besides the fun items, I also had to learn about the more mundane aspects that go into a building, like insulating materials, electrical wiring, solar hot water systems, equipment associated with a large swimming pool, rust proof screws, and much more. Finding the right pieces and getting them to Mahé turned into a real challenge, but all completely worth it in the end.”

The “Residence on the Rocks’ was completed in 2008. Encircled by the tropical forest, the four-bedroom villa has a stunning infinity pool, relaxing covered verandas and spectacular sea views. It’s a unique property which has been built with passion and is a true labor of love. Enjoy a heavenly holiday at this villa paradise by contacting Karl here.