The Revival of a Tuscan Village at Borgo Finocchieto

It takes astute vision to foresee how a collection of abandoned, crumbling Tuscan buildings could return to its former glory, yet this is exactly what propelled the resurrection of the Borgo Finocchieto. Travel with us over the bell towers and Renaissance rooftops of Tuscany and across the rolling vineyards of Montalcino as well delve into the fascinating history and revival of this enchanting 13th-century village.

The Borgo Finocchieto is an exclusive rental villa like no other. Sitting atop the Tuscan hills, with a commanding view of the surrounding valleys and forests, the villa complex consists of five houses divided up into various common areas and 22 suites, the perfect venue for intimate special events.

The buildings previously made up a farming village passed between wealthy Tuscan families for centuries and was inhabited by sharecroppers until the 1980s. From the marvelous site we see today, it’s hard to believe that when its current owners came across it in 2000, all they found was the skeleton of a once-thriving rural community. The abandoned houses and sheds were covered in ivy and weeds while masonry had been pulled apart and some structures had completely collapsed.

The Borgo’s newest patron, an American of Italian ancestry, approached the reconstruction of the Borgo with passion, teaming with a local architect and a crew of builders who had spent lifetimes working with traditional materials and old methods. He tells us a little more about this process below:

“Wherever possible, structures were left untouched – walls, archways, windows and doorways were allowed only where there once had been. The state of disrepair demanded that much be rebuilt, but meticulous care was taken to focus on preserving the surviving structures and employing traditional methods. In some cases, such as the manor house, decorative elements such as door and window treatments, stenciling and original paint colors were faithfully reproduced, while wooden beams, arches and ceilings were restored to their original splendor.”

“After ten years of planning and reconstruction, the Manor House has finally returned to what was, perhaps, its original function, the country retreat of a noble Tuscan family. The other houses, of more modest origin, including at one point a chapel and the housing for the peasants and livestock, have new purpose after decades of disuse. Details like the communal outdoor brick oven and the time-worn steps leading to the main floor of the Manor serve as reminders that despite modern comforts, the Borgo’s history is long and rich.” 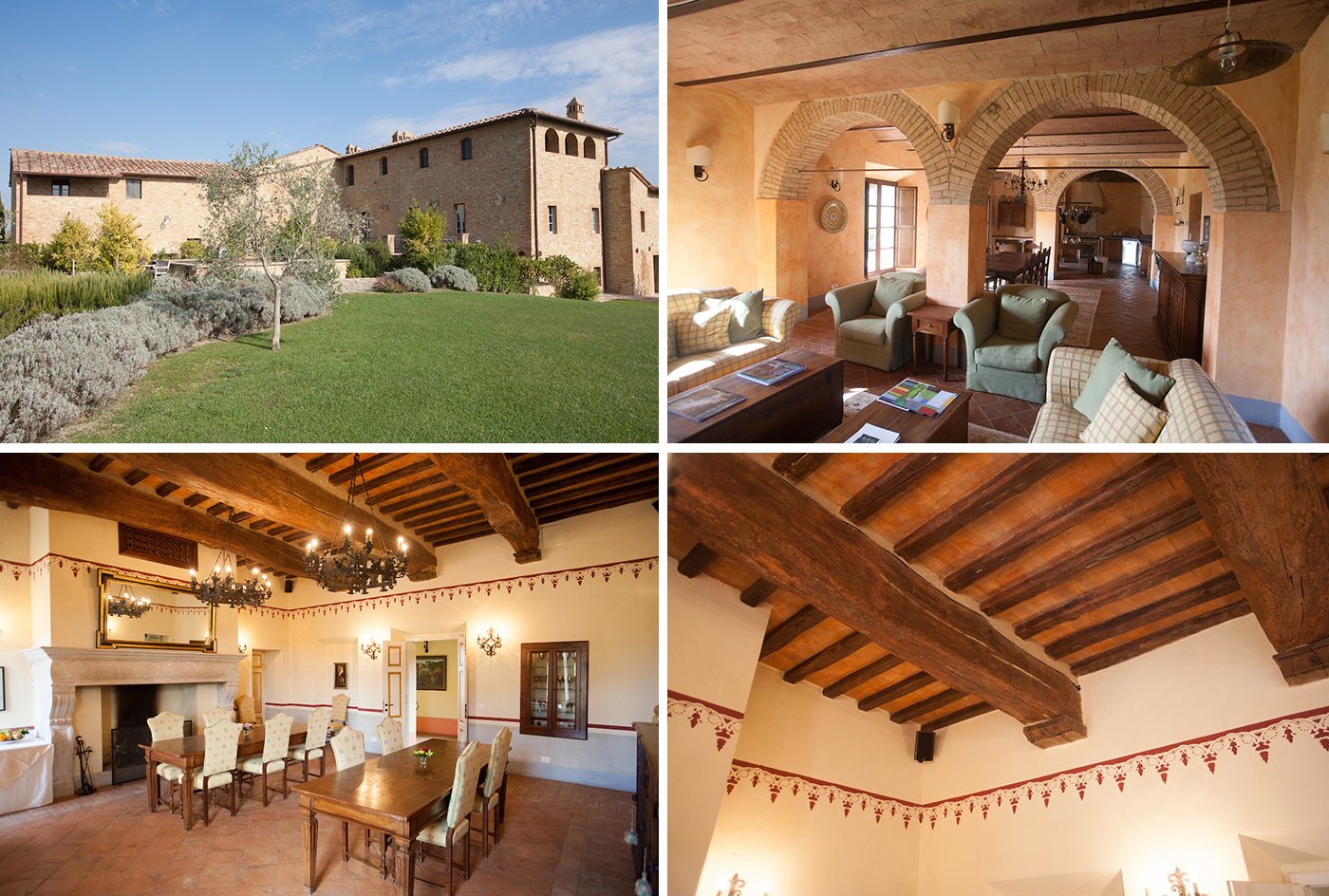 The interior also received as much attention as the structural restaurant as described here by the Borgo’s interior designer Karen Hartman:

“The Borgo Finocchieto is decorated in a traditional country Italian theme. The main villa is slightly more formal than the independent houses but still reflects what might have been found in a city family’s country retreat, as suits the great house’s history. All of the furnishings and accessories were found in Italy, although most hail from Tuscany, in and around Siena and Florence. My first choice was to use antique or old pieces, which I often found at markets and fairs. This meant many trips to Arezzo’s world famous market held the first weekend of every month and to Lucca’s market on the third.

“Over the years I have developed a network of dealers, typically family run businesses, specializing in the restoration of period pieces. These enterprises generally include large storage facilities, called magazzini. Here I was encouraged to pick and choose from pieces in their “found” condition and then have them restored. Many of these ateliers also have state-of-the-art fabricating equipment so that, when necessary, I was able commission new pieces. Very often these dealers have specialties such as woodworking, iron mongering, stone cutting, or upholstering, which were handed down through the generations, and the entire family will be involved in the business in some way or another.

“This includes the Calattini family of nearby Poggibonsi, who restore and sell lovely examples of Italian country furniture, as well as operate a thriving business in reproductions. Among the many pieces they supplied for Borgo Finocchieto are the beautifully painted headboards found in most of the bedrooms.”

The best way to understand the transformation of the Borgo is by witnessing it yourself through this wonderful video on its renovation:

Everything was carefully thought out to keep its historic charm while bringing the Borgo up to 21st century levels of luxury and comfort. The lovely grounds are adorned with local plants and trees, a 60-foot oval pool, diverse sitting areas in addition to tennis, basketball and bocce courts. Inside, guests can relax in the spa with its Jacuzzi tub, cold splash, steam room and dry sauna or keep fit in the well-equipped gym.

The Borgo’s chefs prepare dishes for anything from formal dinners to casual picnics using traditional Tuscan recipes and ingredients paired with modern flare. The artistic and cultural treasures of the region can be easily visited on day trips from the Borgo, though visitors are surrounded by these without ever having to leave the estate.

See the results of the impressive restoration work done at the Borgo in the below amazing drone video “tour” of the site or reach out to the Borgo at this link to start designing your own special event at this truly magical destination.