For almost twenty years our experts at Volcanoes Safaris have been at the forefront of reviving tourism in Uganda and Rwanda. Described as a ‘visionary conservationist’ by the Financial Times, its co-founder Praveen Moman has fostered the evolution of these unique eco-luxury lodges, distinguished not only for their design, but also for their strong commitment to community engagement, advocacy for gorillas and environmental conservation. We travel to the lush mountains of Rwanda and Uganda to learn more about this exceptional tourism project. 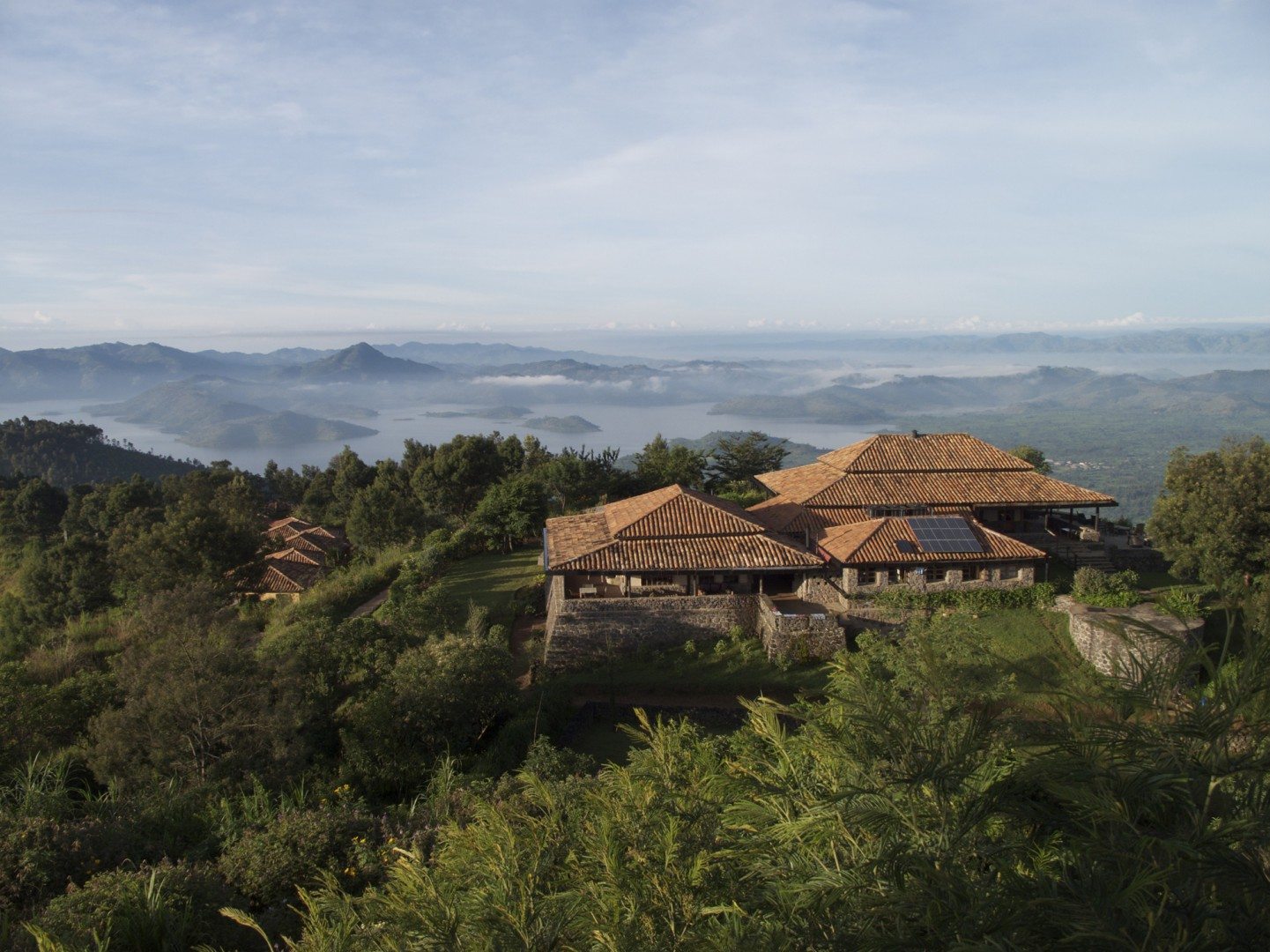 “Conservation and tourism must find a way of delivering bread on the table to the poor if they are to stay relevant in the dramatically changing Africa of the 21st-century” – Praveen Moman, Co-Founder of Volcanoes Safaris

Established in 1997, Volcanoes Safaris consists of Virunga Lodge in Rwanda, and Mount Gahinga, Bwindi and Kyambura Lodges in Uganda, all located in a spectacular mountainous setting next to great ape parks. These award-winning lodges have been created with and still maintain a sensitivity to local culture and aesthetics, the post-conflict context and the need to use resources responsibly. Conservation, community engagement and sustainability are built into every aspect of their operations. As such, few lodge companies in Uganda or Rwanda can match Volcanoes Safaris’ eco-vision and achievements. 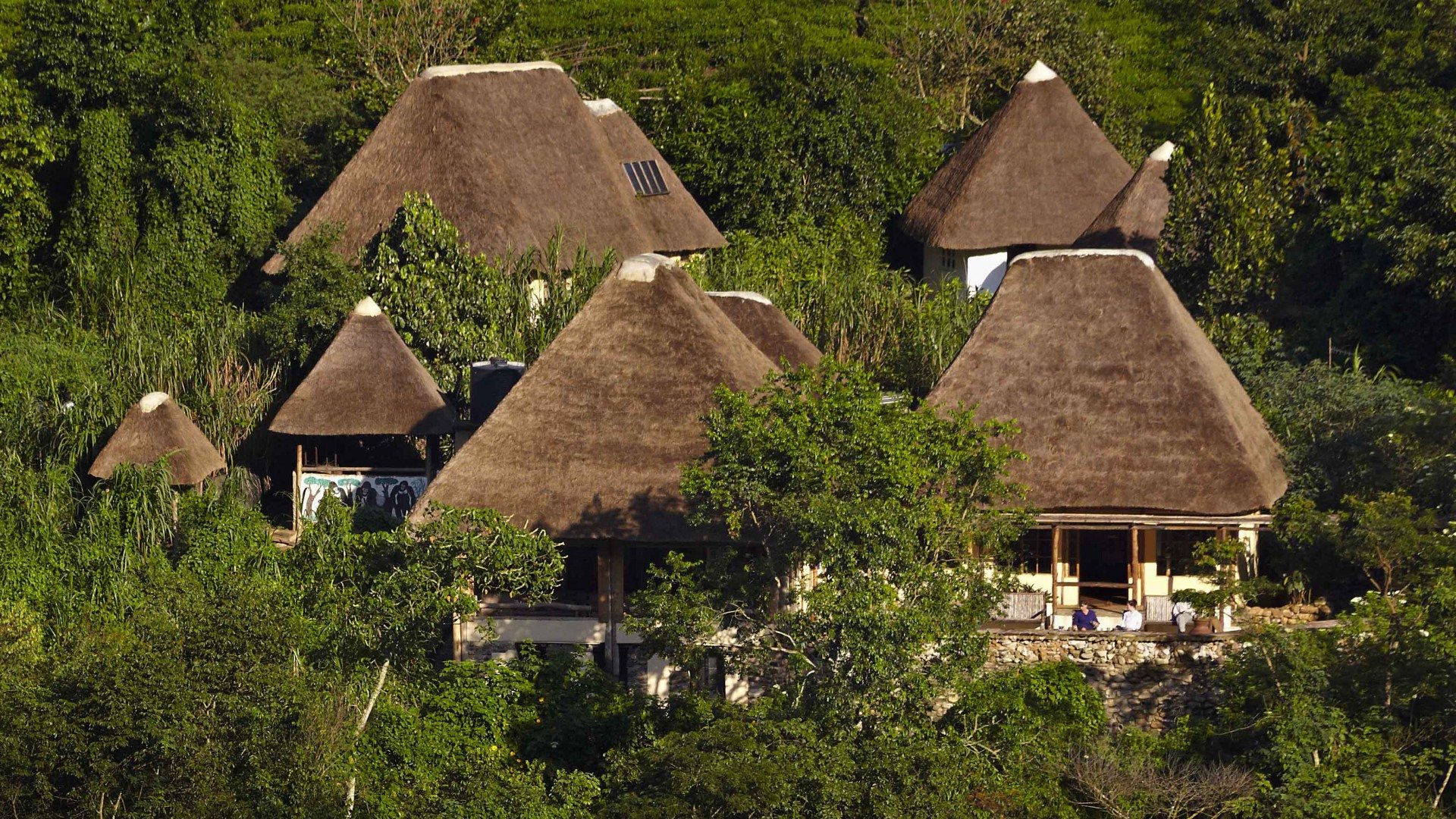 In 2000, Volcanoes Safaris became the first safari company to take clients to Rwanda. Praveen Moman tells us more about this evolution:

“The original Virunga Lodge that we opened in 2004 had just four basic cottages, simple rooms with locally made furniture; kitenge cloth curtains, hurricane lamps and very basic bathrooms of dry toilets and bush showers. All around us, people were rebuilding their lives, constructing basic shelters, walking miles to collect water, and cultivating their rocky land.

“At that time, a Ritz-like luxury project was unthinkable to me. The context was wrong in philosophical, financial and practical terms. This was Rwanda, within a decade of the genocide. Many people could not have a square meal. They did not have clean water. Children wandered around listlessly. We wanted to fit in with our neighbours, show solidarity.

“We led a wide-ranging partnership project to kick-start tourism around the gorilla park with the support of the UK government. We helped train the staff of the Muhabura Hotel and the National Park Rangers. The area started to open. Confidence started returning. The shops and local hotels started working. Soldiers disappeared from the streets of Musanze.

“Over the years tourism in Rwanda has opened up. We have progressively upgraded Virunga Lodge to accommodate our guests, many of whom are VIPs. The buildings are still local and low-impact, in keeping with our eco-principles of using solar power, harvesting our own rainwater, recycling where we can and using local materials. We still employ, train and empower local people to be the core workers. Today they run and manage our four lodges. They have a genuine pride and passion in their work, and are a constant reminder of how far the community has come since the troubled times.

“Our hospitality is still eco-luxury – remembering where we started – and the fact we share the planet with people far poorer than our guests.” 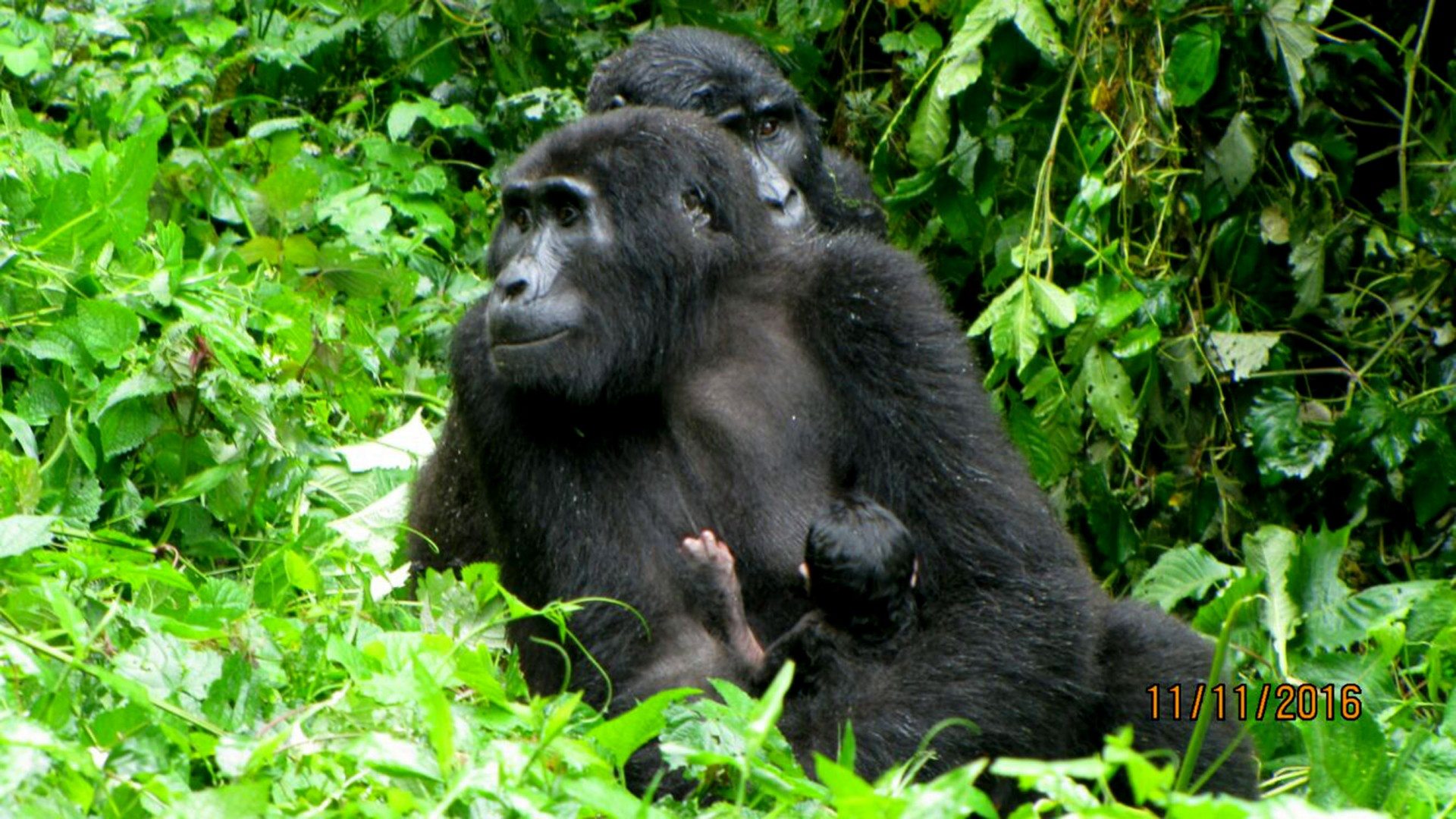 In 2005 Volcanoes Safaris became the first and only safari company to sign up to the UN Kinshasa Declaration on Saving the Great Apes. Praveen’s direct experience led him to be appointed as an Adviser to the Congo Basin Forest Partnership, which promotes sensitive economic development of the forests of Central Africa. He has also been on the panel of the GRASP Great Apes Summit. The Great Apes Survival Partnership (GRASP) is a United Nations initiative that was founded in response to the critical threats facing great apes and the forest ecosystems on which they depend to survive.

Over time, Praveen and his team have developed Volcanoes’ Great Ape Ecotourism Model, the underlying philosophy of everything Volcanoes Safaris does. Local people have to make money from the gorillas and the tourists who visit them, or they will simply cut down the gorillas’ natural habitat and plant more crops just to feed their families. As an alternative, the Volcanoes Safaris Partnership Trust has created a cultural experience with the landless, disenfranchised Batwa Pygmies near Mount Gahinga Lodge in Uganda so the Batwa can earn revenue from tourism. With no tourism, it’s likely that no one would take an interest in the forests of Africa. In 2013, Volcanoes Safaris’ clients contributed over US $1.2 million to Rwanda through gorilla permit sales alone. 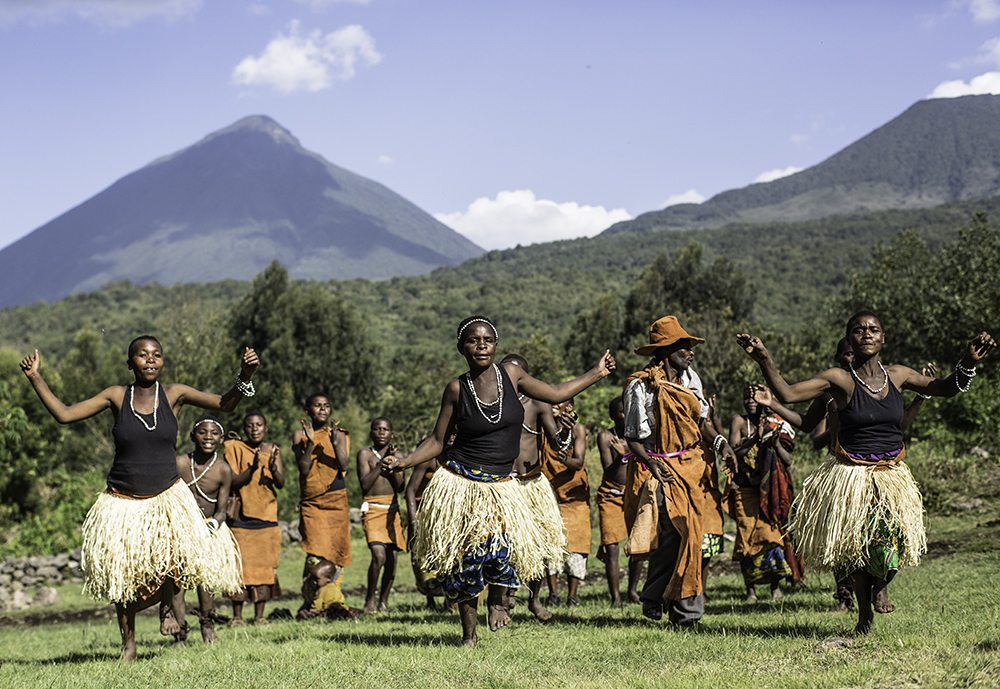 Volcanoes Safaris welcomes the Batwa Cultural Dance Group to perform every week at Mount Gahinga Lodge for its guests, who are warmly encouraged to join in with the dancing. The weekly dance draws in huge crowds of local children who come to watch and participate. Through dance performances the Batwa communicate their traditions and help keep their culture alive.

In 2009, Praveen established the Volcanoes Safaris Partnership Trust (VSPT), a non-profit organisation with the goal of creating long-term, self-sustaining projects that enrich the livelihoods of local communities and promote the conservation of the great apes. The Trust employs one full-time staff member at each of the four lodges. 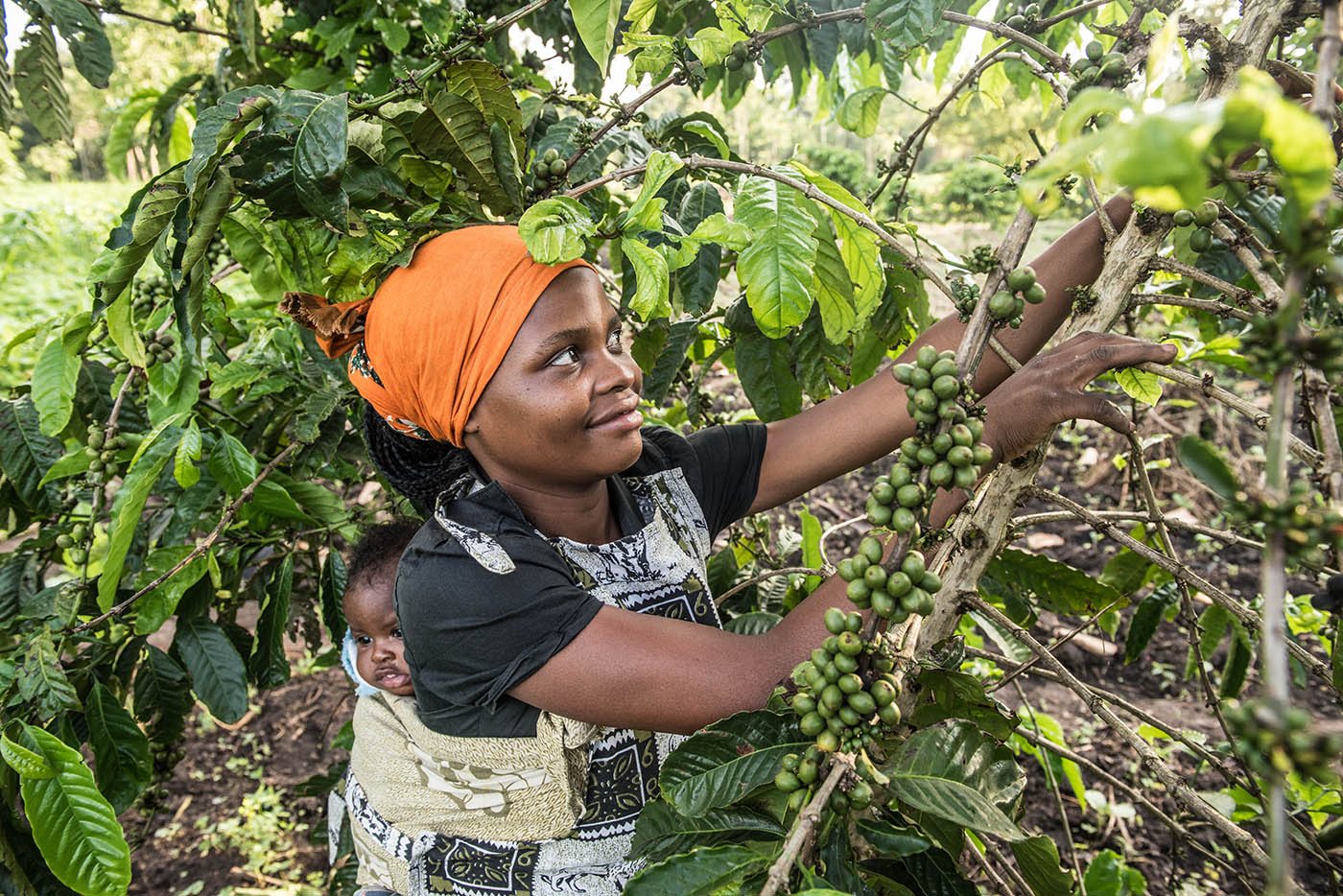 Its projects include The Omwani Women’s Coffee Cooperative, which merges traditional agriculture with eco-tourism to improve the livelihoods of a small group of disadvantaged women living in Kyambura village, near the Volcanoes Safaris’ Kyambura Gorge Lodge. The VSPT receives funding through Volcanoes Safaris, which contributes $100 from every full lodge booking. Many lodge guests also choose to make private donations to the Trust as well.

In recognition of their efforts, in September 2016 Volcanoes Safaris Partnership Trust won the PURE Award for Community Engagement specifically for its Bwindi Bar, a colourful local café in Buhoma village, the heartland of Uganda’s gorilla tracking tourism. All profits from the popular bar are reinvested in hospitality training and work experience for local disadvantaged youths, allowing them to directly benefit from gorilla tourism. 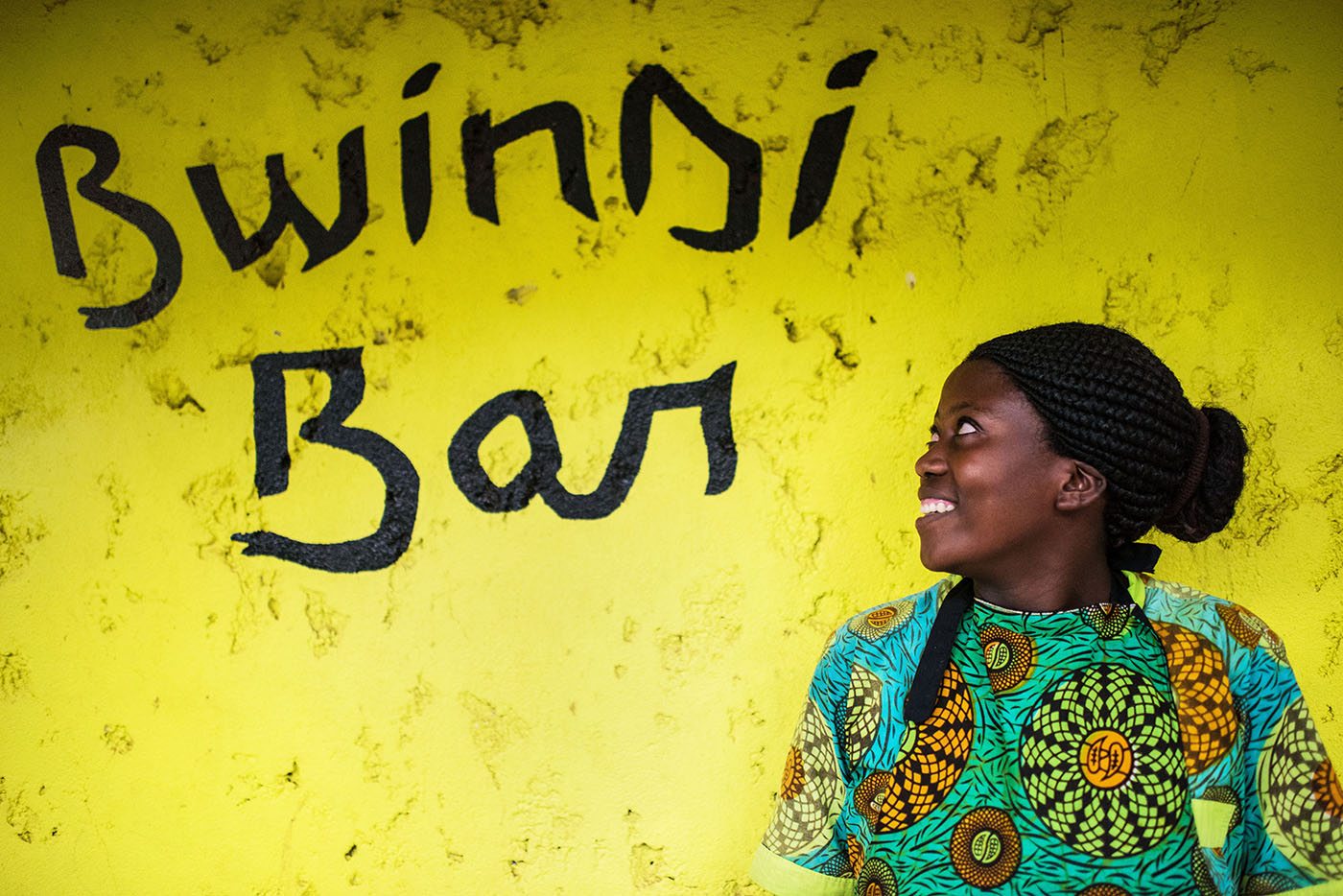 In addition to their community engagement, Volcanoes Safaris has recently been named Africa’s Best Romantic Retreat at the 6th Annual World Boutique Hotel Awards for their Virunga Lodge. Magnificent Virunga Lodge is set on a magical hilltop with a stunning panoramic view of the dramatic Virunga volcanoes and shimmering twin lakes of Ruhondo and Bulera. Its ten bandas (rooms) offer elegance and great comfort, with their ‘organic, bush-chic’ design reflecting the local building style. Each one has a private terrace and fireplace, providing the perfect romantic getaway.

Praveen Moman drives ahead with his commitment to conservation and promoting sustainable tourism in East Africa. His leadership will surely allow VSPT’s projects to continue to advance and flourish in the future.